Subject to the guidelines as much as we can - Please wear a facemask, wait outside until we call you in, extra hygiene between clients etc and bear with us a little slower than normal

First session 10am Wednesday 5th May 10am

Ring the Diner on

No surgery, X-rays I run a referral practice but you can self refer

Evidence for the value and benefits of raw feeding increases...

I would like to share with you some recent research which I was privileged to hear about on webinars and reading over the past month or so.

Should dogs and cats be fed a high carbohydrate diet?

Dogs genomes are different to wolves in a number of aspects including the fact they have genes which allow them to produce amylase (the enzymes which the gut uses to digest starch. Does this mean they can therefore be fed high levels of carbs?

Research has shown that wolves diet consists of approximately 50:50 fat and protein and only 1% starch

Domestic dogs of a wide variety of sizes and breeds if allowed to self select foods choose to eat 4-7% starch.

(Feral) Cats naturally eat about 2% starch and natural would choose to avoid more starch if given a free choice.

Wild animals will by the laws of natural selection will eat the foods that give them the best chance of survival. 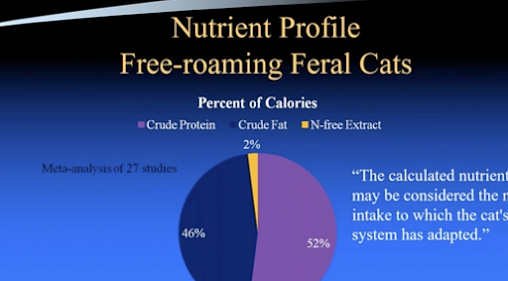 So why do Commercial cat foods contain as much as 40% starch can we find research to back this up and disagree with the above assumptions. Yes there is a study Hall et al 2018 which found cats would choose t eat more starch than that... 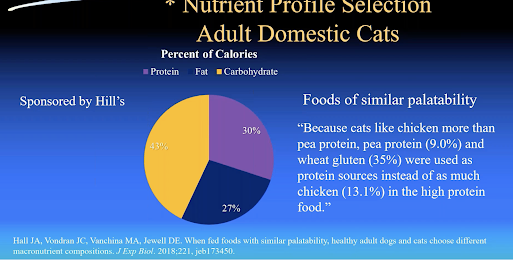 How did they get this figure that is so different - They used as protein sources total un-natural foods such a pea and wheat protein as their food sources because as you can see on the slide and cats like chicken better.
What?!!! Guess who sponsored this research HILLS
There are similar studies in the dog... 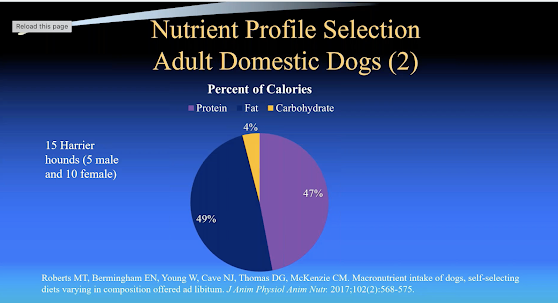 Above dogs should to eat less than 10% starch if given the choice and no surprise there is a studies sponsored by H*** Pet Nut*** attempting to dispute this ad again they chose to add to the diet a chicken flavour enhancer to all the diet from which the dogs could chose. They found dogs ate significantly more starchy carbs: 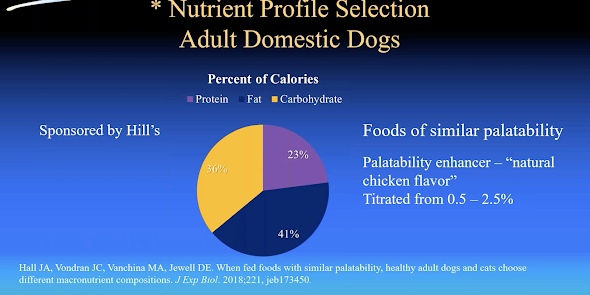 Why do the commercial food guys add carbohydrate?

1. Its a much cheaper source of calories

2. You need to use starch to bind the kibble and form the dry foods

We have shown dogs and cats would not chose to eat very much starch but is it harmful?

There is increasing evidence to support observations myself and other holistic vets have been seeing for years that pets do much better on a raw based, minimal starch diet or even a cooked home prepared diet if they are balanced of course. 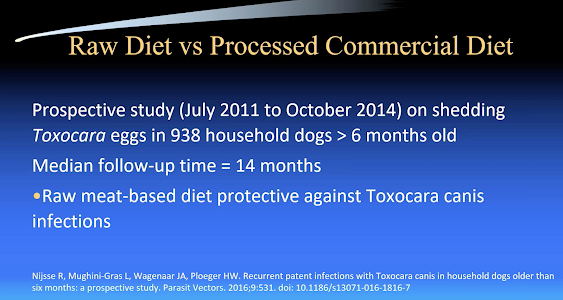 It would seem the immune system of dogs that are naturally fed are much better able to defend themselves against this intestinal worm.

A small study on the gene expression of white blood cells - the immune system cells macrophages and found differences in transcriptome expression. Basically within 3 weeks of changing between raw and processed diet there was an increase in inflammatory cell expression. Kibble causes chronic inflammation.

Studies in Finland I think I have written about before show that raw foods are dramatically protective in preventing Canine Atopy Dermatitis CAD in dogs fed a raw diet in the pre-natal period. The lowest levels of CAD in young adults was in the cohort in which the dam was raw fed and pups weaned on to raw food with intermediate level were pups were raw fed soon post weaning.

(Atopy is inflammation of the skin caused by allergy and extremely common in practice.~) 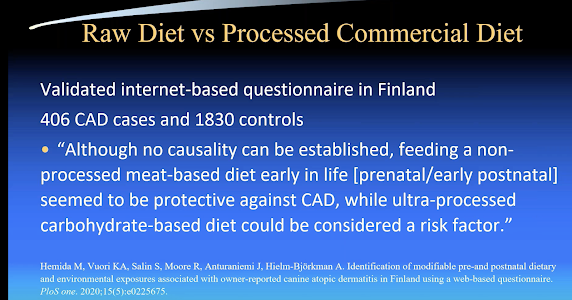 Newer studies I think are getting us a step closer - it's the microbiome. There are dramatic differences in the bacterial populations in the gut and stool of raw fed low starch diets. There are increases in the variety of bacteria found in raw fed animals.

There are dramatic changes in the numbers and types of bacteria in not only the faeces but also the skin microbiome. We do not know what each type of bacteria does as yet and there is a lot more to learn.

I will tell you more as I learn it.

Anti raw campaigners will use figures such as an increase in E. Coli spp. & Clostridium spp to berate raw and cite it as evidence raw is dangerous. But there are many sub-species or strains of these bacteria and increasing evidence in fact increased levels of clostridiceae is associated with faecal health and low faecal volume and a healthy microbiome.

The other measure is of the metabolome - chemicals in the body -  Kibble fed dogs have higher levels of methionine and cystathionine chemicals associated with inflammation and bile acids are higher which has in man been associated with colon cancer. 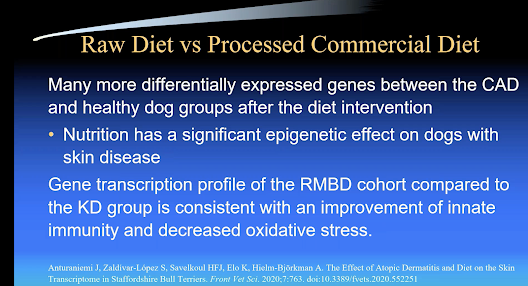 Most of these studies are very small numbers of animals and of course will be criticised by Big Kibble - Mars, Pedigree , Nestle and other pet food manufactures.

The micro biome research is very new and I am sure we will learn more over the next few years to support our observations in practice.

Feeding Dogs: The Science Behind The Dry Versus Raw Debate Paperback – 20 Dec. 2020 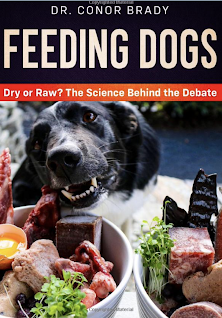 Coconut Oil - Is it good for your Dog?

Coconut oil is a fashionable addition to the diets of both people and there pets.

Is it good for your dog? NO stick to an species appropriate diet

Not according to these researcher. Unless your pets microbiome is used to these forms of oil it can cause more problems than it helps.

You can really upset the delicate balance of your pets gut flora and cause inflammatory chemical to leak out of the gut with coconut oil and many other novel foods which pets are not used to or evolved to consume. Read more about the microbiome on my website.

The microbiome is the population of micro-organisms which live along side us in or gut and elsewhere and I think is the reason a raw diet helps so many of my patients.

Our next vaccicheck clinic has been arranged for Saturday 12th December at the usual place.

Give them a ring to make an appointment

If there are as in most dogs adequate levels there is no need to have them vaccinated - result!!

Covid distancing and masks are required and used.

Vets who advocate Raw Feeding will confirm that they see a reduction in the severity of skin allergy (atopic dermatitis) and IBS (Inflammatory Bowel Diseases) when they change a dog onto a raw diet.

This has been confirmed in research presented to the conference by a Finish Group led by Anna Hielm-Björkman DVM, PhD in Finland

When a breeding bitch is fed a raw diet and her puppies are fed raw for the first few months of life the incidence of Canine Atopic dermatitis is 3 times 300% less likely to occur. There are other factors such as genetics but diet has a huge affect.

You can have a look at the studies at dogrisk.com/publications

Anna and her team run DOG RISK in Finland and need funds to improve the data and run more studies. If you feel you can donate so we can gain more evidence to fight back against Mars Nestle and the like please make a small donation

Discovery is ‘extremely concerning’ for water insects, and fish and birds that depend on them

This is a headline in todays Guardian Newspaper 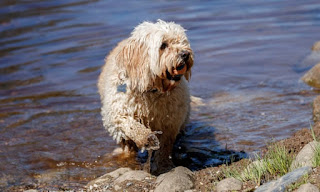 For more about this increasing problem read my website as well

Why should you avoid the overuse of modern anti-parasitic drugs?

There are newer 'chewable" alternative flea/tick treatments but there is increasing evidence of neurological problems with these which you can read about above.
There are alternatives but they do take a little more effort from you the pet parent than can be affective and are so much better for the environment and your purse.
My website will have more details soon or you can contact me
Graham Hines
Comments

The Veterinary Herbal Medicine Week 2020 is nearly upon us

Every week day at 7pm you can join us for a facebook talk to learn more about how herbs can help you or your companions. 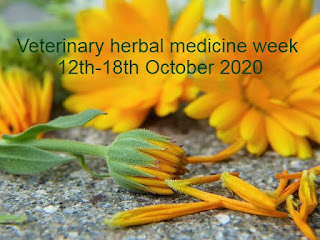 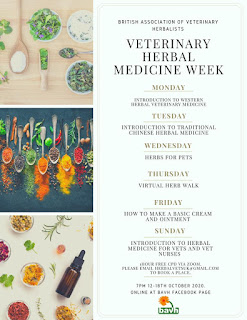 We take a small blood sample from you pet and than use this to measure antibodies to Adenovirus, Distemper and Parvovirus in the blood. For this we can tell if he has been vaccinated successfully or had a natural infection to give him antibodies

If the antibody titers are positive then you will not need a vaccine for any of these diseases.

When should it be done.

How long does protection last. Probably for life but we recommend a retest every 3 years if a good level of antibodies are found

Read more about what Vaccicheck Antibody testing is here

Should you Neuter, When should you neuter -

There has long been discussion around the most appropriate age for dogs to be neutered.

Certain dog breeds have been shown to have an elevated risk of developing cancers and/or joint disorders when neutered at an early age. However, that risk had only been assessed across a very limited number of breeds. A new study published by researchers from the School of Veterinary Medicine at University of California, USA, sheds new light on this topic. ‘Assisting Decision-Making on Age of Neutering for 35 Breeds of Dogs: Associated Joint Disorders, Cancers, and Urinary Incontinence’, a 10 year study of 35 dog breeds, has uncovered a large disparity of risk of joint problems and cancer amongst different breeds.

The researchers analysed data from thousands of dogs examined at the University of California Veterinary Medical Teaching Hospital to try to determine whether neutering, the age of neutering, or differences in sex affected certain cancers and joint disorders amongst different breeds of dog.

In most of the breeds examined, the risk of developing problems was not affected by the age of neutering. Not surprisingly researchers found that vulnerability to joint disorders was mostly related to body size.
Small-dog breeds seemed to have no increased risks of joint disorder while a majority of the larger breeds tended to have joint disorders. Interestingly, an exception to this was among the two giant breed, great Danes and Irish wolfhounds, which showed no increased risk to joint disorders when neutered at any age.
The researchers also found the occurrence of cancers in smaller dogs was low, whether neutered or kept intact. In fact, only two small breeds, Boston Terrier and Shih Tzu, showed a significant increase in cancers associated with neutering.
In most cases, a dog’s owner can safely choose the age of neutering without increasing the risks of joint disorders or cancers.
However, of the 35 breeds studied, 9 breeds showed increased risks and were recommended to be neutered after 23 months of age. For males these breeds included Bernese Mountain Dog, Boxer, German Shepherd, Irish Wolfhound, Standard Poodle. For females the breeds included Boxer, Cocker Spaniel, Doberman Pinscher, German Shepherd, Shetland Sheepdog and Shi Tzu.
To assist pet owners and veterinarians in deciding the appropriate age of neutering a specific dog, guidelines are laid out for neutering ages on a breed-by-breed and sex basis. The study suggests that dog owners should carefully consider when and if they should have their dog neutered.
Graham Hines
Comments
See Older Posts ...